From Mariam in Abuja: Stand with the people of  Ukraine!

Eve of the Feast of St. Nicholas

Why Saint Nicholas Freedom Group?
St. Nicholas Freedom Group was formed to fill a void.   Previously, there was no substantive effort from with the Orthodox Churches to address human trafficking or issues jeopardizing the freedom of conscience, and religious freedom.  St. Nicholas Freedom Group is a means and voice to confront the tragedy of modern slavery as well as protecting religious freedom both strategically and practically.
St. Nicholas Freedom Group is a means to actualize the Orthodox Christian perspective on the dignity of the human person, “personhood” in the fight for religious freedom and against human trafficking.  Freedom is essential to the life and experience of each human being.  Human love is only possible when a person can live, think, believe, and speak freely.
Being enslaved, employing or profiting from slaves, or being forbidden to think, believe or speak freely anywhere destroys freedom, curtailing, or inhibiting love.  Slavery or profiting from it is one of the most degrading forms of human oppression.  Likewise, denial of freedom of belief or conscience is a horrendous form of oppression as well as abuse and leads to slavery.
Slavery and threats to freedom of belief or conscience exist everywhere in our world today.  “Oppression anywhere is a threat to freedom everywhere” – Dr. Martin Luther King Jr.
Presently “human trafficking” or “modern slavery” as it is variously named is a worldwide phenomenon.  Current estimates are that 40,000,000.00+ human beings live in slavery worldwide.  The disproportionate population of enslaved people is women and children.
Simultaneously, religious freedom and freedom of conscience are under attack by governments, corporations, media, philosophical and religious groups.
Orthodox Christians believe that every person, regardless of the choices they make in their life or unalterable genetic or physical facts about them, is created by God in His image and fashioned after His likeness.  Therefore, for Orthodox Christians, “slavery” is a form of blasphemy against God, by degrading His image “not made by hands” as merely a commodity.  Slavery forsakes the inherent sanctity and goodness that God creates and loves in His children.
Slavery in the United States is tragically not an issue settled by the US Civil War.  Current estimates are that over 400,000+ are enslaved in the USA.  The estimates for those enslaved in Canada are 10,000+.  The vast majority of native Orthodox countries have a tremendous problem with people living in slavery.    These include but are not limited to the countries of Greece, Romania, Ukraine, Russia, and Moldova.  How can we venerate Holy images, Icons made by people and ignore the circumstances of the Holy Images made by God?
Why Saint Nicholas?
Saint Nicholas is the patron saint of children.  This patronage is a direct result of actions taken by then Nicholas in his life.  The most obvious being the anonymous donations of his personal wealth to provide dowries to three young women so that they would be considered “marriable,” thus preventing them be sold off as slaves.   From these actions and others of his, Saint Nicholas became an example of the power of grace and love to intervene effectively in the lives of the most vulnerable of God’s children.  Unfortunately modern society has denigrated the reality of Saint Nicholas by misappropriating his life and symbolism for commercial purposes.
However, we have the opportunity to operationalize the great work of Saint Nicholas today.   Saint Nicholas Freedom Group is just one part of that effort.  You are the other!  Join us as we set to fight modern slavery and religious oppression in our times.
Please keep those in any form of oppression, especially those in slavery in your prayers!
May God bless you, your family, and your loved ones, especially with freedom and love!
In Christ,
Fr. John Anderson
Post Scriptum (P.S.)

The Saint Nicholas Freedom Group website is a work in progress.  Please check back regularly with us. 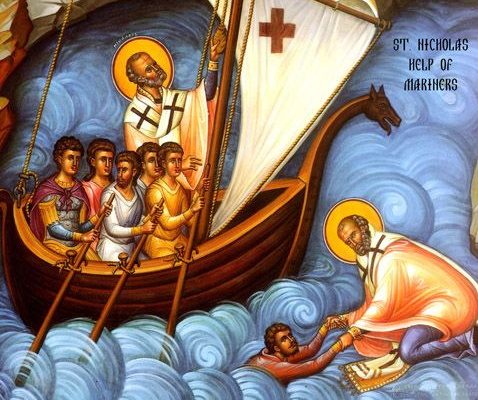 St. Nicholas Freedom Group is a practical expression of the answering of the question “who is my neighbor?”.

St. Nicholas Freedom Group works as a leader in a pan-Orthodox Christian and allied effort to functionally ameliorate the scourge of human slavery of any, as well as the other most brutal types of oppression that afflict the most vulnerable of God’s people, women, and children.   Simultaneously, St. Nicholas Freedom Group works to preserve as well as protect the freedom of belief and conscience of every human person as an Anti-Human Trafficking and International Religious Freedom Non-Governmental Organization.

Donations can be made by pressing the button below:

Donations can be mailed to the following address: